Looking over some of my notes the other day, I realized that I have been “working” on my novel for almost 5 years now. Of course, it didn’t help that I lost good chunk of the second draft three years ago because of a corrupted flash drive, but a big part of the reason it has taken me so long to write this (besides laziness) is because I want to get the details right. 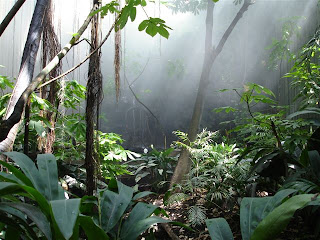 I aspire to write books like “A Game of Thrones” by George R. R. Martin or “Zahrah the Windseeker” by Nnedi Okarafor, which are filled with exquisite details about clothing, food, flora and fauna. However, what eludes me is how to balance the details with the overall plot. How do you write an epic story without getting bogged down by or glossing over the details?
My story is set in two worlds: The jungles of the Forest Omin and the rocky plains of the kingdom of Argand. However, partway through this current draft, I realized that I had no real, concrete idea what either of these places looked like.

First I had to decide what details were appropriate even to use. Because I had already committed myself to certain things, such as the general setting, the level of technology and the climate, I had to go through real-world examples to figure out how to put them all together. It turned out that 12th-century Spain, when the Muslims ruled much of the peninsula and built beautiful castles among the hills, fit Argand precisely. And the indigenous communities of the Amazon jungle seemed to be the perfect base for the people of the Forest.

While writing, I found myself swinging from one extreme to the other. Sometimes, I spent so much time researching (though every time I moved to somewhere new, much of that research would be misplaced) that I neglected the actual task of writing. Other times I would write these dull stretches that had characters “touching things” and “seeing landscapes.”

I have read plenty of books and stories where a lack of research was clear and I know that frisson of annoyance when the author just doesn’t get it right. I’ve even been on the other side of the aisle; a reader once chastised me because my description of a horse was wildly inaccurate. It did not matter that the last time I had been near one was when I was three years old, I should have done the research. Writer Unboxed has a great article about this here. But I would love to hear what other authors have to say.