After reading a review of his book online, I became intrigued by debut author Temitayo 'Tylor' Ilori. He has just published a fantasy-fiction novel called “Doom’s Wing: The Legend of Tellam.” While I have yet to read the book myself, I conducted an email interview with him to find out just what makes this young man tick.

Here’s what he had to say:

1. What inspired you to write this novel?

-The inspiration to write Doom’s Wing came after I finished a long manuscript of another book entirely. It came with the phrase that started it all, “If you dare ride on Doom’s Wing to achieve a means, you will definitely get to an end called destruction.” I wanted to write the story of fun, love, justice, liberation and adventure and it turned out to be just that though not as planned initially. I would therefore say Doom’s Wing was a prophetic statement for this generation and those to come. A revelation of some sorts.

2. Who would you say are your literary biggest influences?

I fell in love with Rene Brabazon Raymond’s books (James Hadely Chase’s Series) as a teenager but before then I had loved the writings of King Solomon in some of his works like Sirach, Proverbs and Songs of Solomon. Growing up, I became entranced with the works of Greek philosopher like Homer and Roman poet, Publius Ovidius Naso, known as a Ovid, especially his work Metamorphosis. I had an encounter with The Burning Grass of Cyprian Ekwensi and it changed my perspective of storytelling. But in all these, the biggest influence is God, the way he designs and writes the stories of our lives is amazing. It amazes me how stars shine and moon glitters and beggars become kings and kings fall into misery.

3. What were your biggest challenges in writing this novel?

-The major challenge I had was unstable power supply as I don’t write my manuscript with pen and paper, I type directly into the computer. Also, in the quest of writing, after I wrote Doom’s Wing to chapter 3, about 60 pages, I wanted to upgrade the operating system on my computer and the person that did the upgrade for me thought he had my files copied into a flash drive, but it was a false backup; empty folder. I almost lost my sanity. For two weeks, I asked myself what was more important, is it to start over again or to give up. But I said to myself, I can always start all over again and I can only write better. And it amazed me how the book later came out, better than the first attempt. The bottom line is if you can’t start again if you lose something, you are not worth starting it at all.

4. How can readers get a hold of your work?

We are still working at a major marketing plan that will make it available on everybody’s shelf. But for now, you can get it in Silverbird Galleria, V.I., Lagos, Media Hub, Palms shopping Mall, Lekki or Ebeano Store, Ikota VGC or call 08033501037 or 07041314110

5. What do you think is the future of Fantasy-fiction in Nigerian literature?

-The ground has been broken already. Story-telling is getting boring in the African continent already, we need a new flavor and it has come to stay. I have been challenged for using the of names I used and asked why I didn’t use common Nigerian names but my answer has been "I wrote a fantasy and I have the liberty to create a world that does not particularly exist and also create the people". Africans must break off from this pattern of “as an African you must be write about Africa or something related”. Writing is more than that. We must be able to express ourselves beyond what is familiar and common. Even the foreign writers like J.J.R Tolkien, J.K Rowling and (filmmaker) James Cameron used characters, names and even languages that are not indigenous to their nationality, tribe or race. Example is the Avatar movie, the latest work of James Cameron where he created used names like Neytiri, eywa, and Eytucan and created the people and language Na’vi. It added beauty to storytelling and that is quite therapeutic when you can be drawn into a world you are not familiar with. Fantasy has come to stay, it has been with us in Africa, especially in our tales by moonlight.

6. What do you hope to contribute to the literary landscape in Nigeria?

Like you have seen, I have come to revolutionize the African literary world and to challenge this “racist thing” that African writers hold on to. I have come to lead a new generation of writers who can and will write in virtually any genre they wish without the fear of criticism. A generation that will break away from the chains of limitations that African writers have wound around themselves. Creativity knows no bound, it knows no culture and it knows no race, when it wants to express itself, it takes the form that best suits it. We can and must choose to write in a relatively uncommon genre. 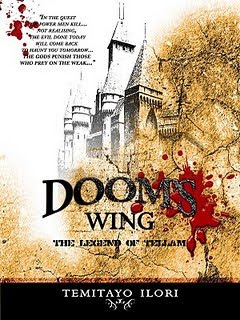