The Trouble with Fantasyland

Being a black woman I have always been drawn to worlds that I could see myself in. I adored Robert Jordan’s “Wheel of Time” series, but I could never finish any of J.R.R. Tolkien’s “Lord of the Rings” books. Jordan’s world was rich with a diversity of human races - whites, blacks, Asians and Hispanics - while the only non-whites in Tolkein’s world weren’t even human. 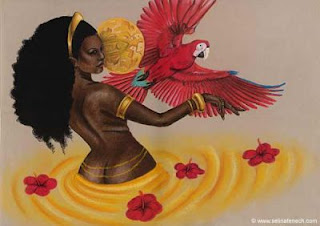 Few fictional worlds have histories of racial segregation and oppression such as slavery, colonialism, Jim Crow or Apartheid, yet often their characters and situations play out as if they did. The trouble with fantasyland for me is that there are just some places that I, as a black woman, cannot go – not even in my imagination.
One can argue, and many will, that conceptions of race in speculative fiction have come a long way. But I would argue that the more things have changed, the more they have stubbornly stayed the same.
Let us take the fantasy show “True Blood” on HBO. I discovered it this spring and I loved it. It was an intelligent twist on the standard vampire-falls-for-human story with complicated characters and a rocking good storyline. At least it was at first. By the second season, much of the subtlety of the show is lost amid the sturm-und-drang of witchcraft, sorcery, Gods and monsters that enters the storyline. And all pretence to racial complexity is abandoned as characters become more stereotypical: angry black girl Tara becomes even angrier and more spiteful; her alcoholic mother is no more than an ignorant bible-thumper. And the most vibrant character in the show, the flamboyant Lafayette, is brutally tortured for several episodes for a minor infraction. Throughout, I could not help feeling as if he were being punished for the crime of being an expressive black man. By the way, the white character who commits an even greater crime is never punished.

I suppose it is only to be expected that we bring our prejudices into the worlds we create. After all, many writers of speculative fiction write because we want to bring the inner worlds of our dreams and nightmares to life. However, I think more writers need to think critically about their creations.

I think we need to have more conversations about how we deal with issues of race in fantasyland. For instance, there is an implicit assumption in too many books that unless the color of a character’s skin is directly referenced, the character is white. Another example is having characters of African descent with straightened hair in a world where relaxers and weaves do not exist. Whiteness is the blank paper upon which other races are written.

Because this is a genre in which non-white writers are not well-represented, challenging these issues will be difficult. And it will be even more so for African writers of speculative fiction who are already dealing with issues of “authenticity” from audiences who feel we are inappropriately mimicking Western culture. Yet this is a conversation we need to join. As African writing moves onto the international arena, we must understand the field on which we will be playing. And we must be prepared to wade into the battle.