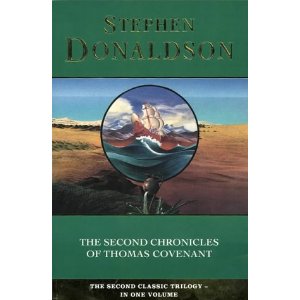 I got the loveliest Christmas/birthday present this year: A bound volume of the three books of the Second Chronicles of Thomas Covenant trilogy by Stephen R. Donaldson. I haven't read Donaldson since I was in high school when I read the first three books of his Thomas Covenant series as well as the two books of his Mordant’s Need series and it was a real treat to be taken back. He represented my first real introduction to fantasy that sought to go beyond genre conventions.

Now, mind you it hasn't been quite the same. I find his language a little too florid and his plot a bit too plodding for my current tastes, but reading him again, I realise that he was always more interested in characters – in their struggle for redemption and acceptance – than in the magic of the world. And I think that as I get older, I am too.

See, I believe good literature cannot be circumscribed by genre. Even though right now literary fiction tends to win the biggest prizes, Some of the best speculative fiction I've read recently didn't rely on a special “hook” to drive their stories forward. In fact,  some of it – like David Mitchell’s Cloud Atlas – would be indistinguishable from the best literary fiction.

And it’s nice to know that I'm not the only one who thinks this. In a Guardian article last month, Damien Walter predicted that Science fiction would continue to move into the mainstream, an acceleration of a phenomenon that caught the Guardian’s attention in 2011 as well.

I'm going to jump on Damien’s bandwagon and predict that speculative fiction will also continue to get “browner” as well. More non-Western writers are showing a growing interest in the genre, challenging the notion that it is the home of the “bearded white male”. In December, I was privileged to be featured in the first anthology of African Science fiction, AfroSF, a collection put together by writer and editor, Ivor Hartmann. And as an editor, I'm seeing some exciting science fiction and fantasy coming out of Africa and the Middle East that’s making me super excited.  Blogs like indi-gene-nous.blogspot.co.uk just warm my heart.