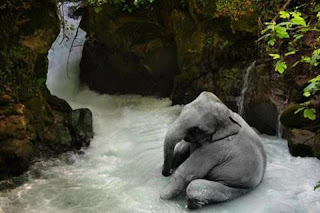 I have struggled all my life with depression, yet I have come to realise that I am – at my core – an open and optimistic person. I have learned that life is easier when you focus on the positive in me and in others. I approach the world with a spirit of openness and honesty and I tend to expect the same from others.

But I live in a country which – at its core – has a jungle mentality. Kill or be killed. Eat or be eaten. Here every social, moral and institutional structure has been stripped away, leaving only the most basic instincts of survival. It’s like the Zombie Apocalypse out here: There is no law, there is no order, no morality beyond what we can present to others, there is only might and who has the most gets the most.

Perhaps that is why we are so critical of each other. If the world is a zero sum game where the winners take all and the losers end up with nothing, then in order for one to get ahead others must be taken down. If you need to go to war, fine. But if you can avoid open battle and win through subtle sniping designed to erode the self esteem and self confidence of the other, even better.


It’s been a challenge staying positive in such a negative space. One way I've done it is by trying to find my own little niche. I surround myself with the uncompromisingly happy. Those with a genuine sense of themselves, who have no need to wear masks because they have nothing to hide. Another way has been by eschewing competition. I believe that the need to be seen as better than the next, to “better pass my neighbour” is one of the toxic by-products of living with a jungle mentality. The others are envy, malice and, of course criticism.

But the best way I've found to keep my sense of myself in this environment has been to just let things go. Every day, I encounter people who try to take advantage of me – mistaking my openness as weakness. Don’t get me wrong, I have flipped my lid on more than a few occasions when this happens, but after the anger has passed all I feel is pity. All the energy they expend trying to get more while giving less or trying to push someone else down while climbing to the top, is (to paraphrase Shakespeare) sound and fury, signifying nothing. And to expend my peace of mind trying to change them or dwelling on the wrong they've done me does more damage to me than just letting it go and getting on with my life.

Some might think this is a privileged position – that I can adopt an attitude of openness and optimism because I have money. They’ll point out that in this society, money will buy you more than just health, security and education; it will buy you respect, justice, and even moral superiority. While I agree that money is important, I disagree that the pursuit of money, unfettered by moral considerations is good for anyone. In fact, I think a big part of why our country is in the miserable state it is in, is because our jungle mentality has put the pursuit of money and power above even our own welfare.

You see, I believe that there are principles that under-gird all societies – things like fairness, equality and honesty – and the violation of those principles have inescapable consequences. Giving up your sense of fairness and honesty to cheat someone else, for instance, may get you the money to buy a nice flashy car, but you’ll never be able to buy back your personal sense of integrity. And without a sense of personal integrity, you can’t be open with others. You’ll view the world with suspicion - constantly afraid that someone will come and take away what you have because you took it from someone else. You’ll become obsessed with presenting an impeccable front – in hopes that your shiny clothes and fancy stuff will distract others and keep them from seeing the emptiness inside you.

My choice to live in a positive space is more than just choosing to be happy all the time. It’s a choice to put my principles above temporary comfort. I work every day to give up a range of damaging behaviours like being critical, trying to impress other people, trying to control everyone and everything, trying to get revenge and trying to get ahead, because it’s just better for me in the long run. I can’t change my society – I'm not sure I want to try – but I can I go into the world with my own good intentions and a personal resolve to do right as much as I can. I will continue to see other people as well-intentioned until I'm proven wrong. And when I'm proven wrong, I say a little prayer and I move on.