My week in Jos

I wrote this article for NEXT newspaper last year after a rattling trip to Jos. I’ve republished it here following the recent reports of several bomb blasts in the city a few days ago.
My parents and I arrived in Jos on a Sunday evening in January. Just as we entered the city limits, we were stopped at a police checkpoint. 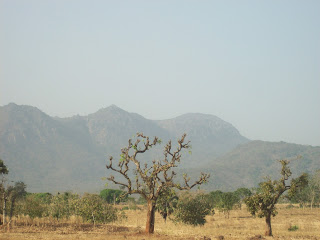 “What happened?” my father asked.

“Na crisis,” was the man’s reply as he waved us on.

We were silent at that. This is not the first violent upheaval the city has known. The plateau is cool and peaceful; a lush landscape dotted with breathtaking rock formations. But since the early 2000’s it has been ripped apart by violence. Relations between the indigenous people, who are mainly Christian, and the mostly Muslim Hausa have never been very good and in 2001, those tensions erupted into a violent outbreak that left hundreds dead and even more homeless. Since then, the situation has only grown worse, with crises breaking out every few years.

Our first night was uneventful. My parents rose early Monday morning so that my father could take a taxi back to Abuja. When my mother returned, we went to the orthopaedic hospital, which was her main reason for coming to town. After the hospital, we headed to Bukuru market to pick up some groceries. We had not been to our home in the suburbs of the city in months, and beyond a few tubers of yam and some non-perishables, we did not have much food.

However, we noticed that the market was unusually empty for a Monday morning. None of the traders we usually shopped from had opened their stalls. Just as we found a parking spot, we saw a cloud of dust in the distance. Suddenly, the streets were choked with people running in all directions. Young men on motorcycles, taxis and commercial buses were vying with each other on the narrow road.

My mother and I did not wait to find out who “they” were. We got back into the car and manoeuvred through the throng back to the house. We did stop at a nearby grocery store to pick up a few provisions. We were sure it was just people panicking; we would go back for our main goods tomorrow.

That night, Bukuru market burned. We did not know this when we awoke. My mother had another appointment at the hospital and we went straight there first thing that morning. While my mother was in the theatre room preparing for her treatment, I noticed the crowd in the waiting room was growing restless. Many were gathered in clusters talking excitedly. That was when I learned of the damage to the market. A group of young men – no one knew for certain if they were Christians or Muslims – had rampaged through. They would break into locked stores, loot them then set them ablaze.

As we talked, tall man in an impeccable suit swooped in. He was the hospital’s director. A 24-hour curfew had just been imposed, he informed us, and all his non-essential staff were to return home immediately. Patients were to leave as soon as their procedures were completed. The hospital was going on lockdown. Someone switched on a radio and we huddled around it hoping for some useful news. But, it seemed as if every radio station had been transported to the Soviet Union circa 1960. All they could offer were bland statements from the governor’s office “exhorting citizens to diligently follow the curfew to ensure the safety of lives and property.” No word as to what was happening, who was responsible, nor what was being done to fix the situation.

My mother came out of the theatre room. Her doctor had told her of the curfew, so we returned home. Our intention to visit the market was now a lost cause. At home we surveyed our stores. Three tubers of yam, four packets of instant noodles, a bag of cous-cous, some tomatoes and peppers we had bought on our way into town, some acha – a local grain, a packet of spaghetti, two loaves of bread, a box of tea and a jar of coffee. If we ate sparingly: a light breakfast, a small lunch and dinner, our haul would last us four or five days. But of course, it would not come to that. Jos had had crises before, we were sure this would all blow over in a day or so. All we had to do was sit tight and wait it out.

That afternoon, I watched in silent horror as the sky blackened with smoke and the sounds of gunfire filled the air. When the wind blew just so, we could hear shouting and screaming from Bukuru town just beyond our walls. Every now and then, we heard helicopters thunder past, headed for town. My mother was glued to her phone, calling friends and family to hear the latest news. And the worst part was, the man my father hired to be our security guard in the house turned out an utter failure.

L______ is a small man with a mouth full of rotting teeth. He cannot be more than 25 years, but poor hygiene and a persistent drinking habit has left him looking decades older. When we first arrived Sunday evening, we found our front gate hanging open and no sign of the security guard. My father tried to call the man and failed to reach him. So, he locked the gate and went to bed. Sometime towards nightfall, we heard a knock on the back door. It was L_______. He had scaled the back wall to enter the compound – something our tenants had reported he did often, but he had vehemently denied. When my father confronted him, he could only smile vapidly and offer vague excuses. His brother was sick, he told us, all the while reeking of alcohol.

Tuesday afternoon as the world shook with the sounds of small explosions, L_______ came to us asking for permission to go to the junction at the end of the road “to get something.” My father had confiscated his set of keys so that he could not leave without our knowledge. My mother turned him down. He spent the rest of the evening quivering with fear with every shot that rang out and pacing like a caged animal.

On Wednesday we woke to reports that death squads of men dressed as soldiers were going from house to house in Bukuru, killing anyone who opened their doors to them. A friend of my mother’s reported seeing one of these men caught at an army checkpoint. He was found out only because his uniform was out of date and he was wearing sneakers – which soldiers never do. Throughout that day, every time someone knocked on our gate, my heart leapt to my throat. Knowing L______, he would probably open the door, then scale the wall and leave us to our fate. That night, as we heard reports of widespread looting of abandoned homes. The guards from all the houses in our neighbourhood formed a security detail to patrol our street. They lit a bonfire at the junction and took turns keeping vigil all through the night.

Thursday morning, we could still hear staccato bursts of gunfire – this time we were told it was the soldiers. The government had sent out the army in full force to quell the violence, and I did not doubt they were doing just as much damage as the rampaging youths. Many of my mother’s friends – including our next door neighbor had sought refuge at a nearby police barracks. There, they endured cold nights with little food or water.

By now, Jos city had lost its allure and we wanted nothing better than to start up the geriatric Benz and have this trip be a memory fading behind us. My uncle, my father’s younger brother, had offered to drive us back to Abuja, but he cautioned us to wait one more day. We still had no reliable reports as to where the worst violence was. No use running out only to be caught in the crossfire.

Friday morning, with the curfew scaled back to an eight-hour window, we set out. This was the first time we had left the compound in nearly a week. The town was unrecognizable. People clutching their meagre possessions lined the road desperately seeking any form of transportation they could find. The burned-out hulks of cars and trucks littered the roads. We passed shops and houses gutted by fire. At every corner, stone-faced soldiers wielding Kalashnikov rifles had set up makeshift checkpoints and were searching every vehicle on the road. At one checkpoint, an irate soldier had us empty the contents of every item we carried onto the roadside. Police officers rode about on motorcycles looking a little out of their element. The only fuel station in town had been set ablaze when someone drove a truck into its main building. The smell of ash hung thick in the air.

In the days since our return, I have learned that nearly 200 people were killed in the conflict. A prominent Igbo businessman was cut down along with his two sons when he tried to keep looters from invading his home. Many of my mother’s friends have decided to leave the town. Several of them lost their homes and businesses. Meanwhile, the government has made the usual noises about looking into the causes of the conflict and bringing all the perpetrators to book. I doubt it is more than just talk. When an uneasy peace returns once again to the plateau, everyone will go about their business as if nothing happened. As if such clashes are a plague of locusts – appearing without cause and disappearing into the ether. Until next time.